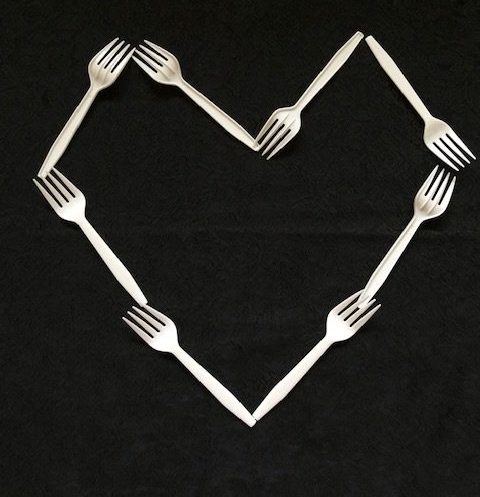 Several years ago, my sister was offered a job that came with an out-of-state relocation package – a VERY generous relocation package that included full-service professional pack-up and delivery – the kind where EVERYTHING you point at in your house gets swaddled, packaged, and carried out by people who are not you. My job in all of this was to be on-site to answer any questions for the movers while my sister wrapped up the details of her old job.

The night before the movers arrived, I (in full achievement-driven Capricorn ego) wanted a walk-through of the house with my sister, so I could anticipate any problem areas.

Moving on to the next room.

My sister: “Why? That’s why they were hired.”

Our last stop was the kitchen. As I opened each cupboard and drawer,

My sister: “All.” [Please note the bold period.]

I opened the drawer that held no less than 816 packaged-for-take-out plastic forks.

Me: “These?” (With a question mark to my voice that dripped incredulity like swamp moss.)

Me: “Why in the world would you move a thousand plastic FORKS a thousand MILES?”

In that moment the volatile mix of a long to-do list, lack of sleep, and a Life Change was set ablaze by my judgement (masquerading as reason.) Therein ensued a harsh volley of words (mostly mine) that left both of us tattered. Although I acquiesced to the packing of plastic forks, I went to bed prickly with righteousness.

The next morning stiff in our blistered feelings and armored by the determination to get each task checked off, my sister headed off to her soon-to-be former workplace and I took my place as sentinel of Stuff to be Re-located.

The moving crew arrived and after a brief (very brief) walk-through the boxes and newsprint wrappers began an efficient flow into the house as the crew succinctly did their thing. Since there was nothing for me to do but stay accessible and out of their way, I took my folding camp chair to a spot overlooking the kitchen.

This is where life changed for me.

Sitting there with nothing to do but keep my opinions to myself, I became aware that the moving guy tasked with packing up EVERYTHING in the kitchen was not the least bit perturbed; nary an eyebrow raised or a furrow to his brow as he methodically went cupboard by cupboard and drawer by drawer. As I cringed in the corner with em-bare-ass-ment, he did his job to make sure the contents of my sister’s kitchen were safely stowed for loading. Nothing was too lowly, nothing priced beyond the scope of his ability to show an efficient care. My perspective began to shift with the realization that there would be no “tsk-tsk-tut-tut” from the packing pro. He was showing my sister the utmost respect for her wishes; something I certainly had not done out of fear that I would be the one judged.

What could I learn from this? As the packing process continued, I made note of the unconditional respect in the moment. There was a neutrality I became aware of in this situation when I removed my own fears and a need to be “right.” This re-location professional was teaching me a HUGE lesson in boundaries. He could pack someone’s seemingly useless items with the same care as someone’s perceived expensive artifacts because he wasn’t taking any of it home. He didn’t need to pack a lot of old baggage in these boxes-why did I? That’s when a glow of appreciation began to warm my heart: moving professionals are among the least judgmental folks out there! I was being shown a facet of unconditional love. This guy brought his skills and knowledge to the situation but only after being asked and contracted and not one minute before! He trusted my sister to make her own choices knowing it would all work out and be delivered as promised.

OK, I thought, I need to pay attention. How many times had I gotten so emotional and taken it so personally when I disagreed with someone’s choice because ‘I knew better’? Where had I tried to pack my beliefs into someone else’s boxes?

If I didn’t want a bushel of plastic take-out utensils, I didn’t need to take them home with me. Simple. I also didn’t need to “tsk-tsk-tut-tut.” Simple, too, but not as easy – still a work in progress.

My sister got safely relocated, unboxed, and settled into her new life atop a mountain following a hair-raising vertical driveway maneuver by the moving van driver, (moving professionals lead such dramatic lives!) And I got to unbox a new life lesson.

Have I been asked for help?

Is the help I’m offering coming from my own fears of judgement and insecurity?

Can I hold a neutral space for the other person’s POV and let each of us tend to our own boxes?

Perhaps you, too, are seeking a new perspective. Reiki and/or Empowerment Coaching might be the very thing to help you figure out what’s ready to be relocated.

One final note: Let me take this opportunity -just in case this is still fresh for her- to publicly apologize to my sister for my judgmental attitude. Ready for some take-out, Ki?

Thanks for spending a moment with me looking at things From Ground Level,

View all posts by Cai King

Your Truth Be Told!